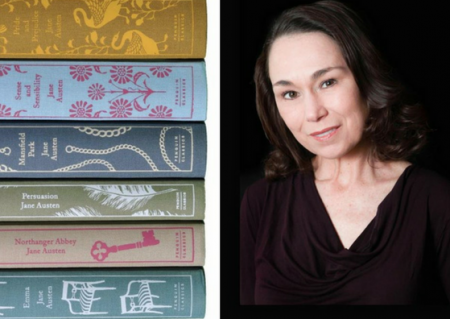 All are welcome to JASNA-GCR's annual free public program to enjoy a fast-paced tour through Jane Austen's novels featuring 5-minute synopses that would make the folks at Cliff Notes gasp for air!

Debra Miller, "a partial, prejudiced, & ignorant Historian," will explore several common themes in Jane Austen's major works offering an affectionate and irreverent review in the style of Austen's History of England. The bonus round will include the most popular pieces from her Juvenilia. Caution: contains spoilers!

ABOUT OUR PRESENTER
Debra Ann Miller is a professional actress, vocalist and voice-over talent with over 30 years of experience as a performer for live audiences, television and film. Debra has balanced her career between commercial and educational theater since graduating from Michigan State University’s Department of Theater in 1981.  Since 1997, she has toured the country with Mr. Krebs as one our nation’s more controversial First Ladies, Mary Todd Lincoln; accompanying him to such places as the University of West Virginia, the Gerald R Ford and Abraham Lincoln Memorial Library and Museums, and The Capitol Building in Washington, D.C. In recent years she has focused on writing and touring one-woman plays with Historical Women of Letters, in which she portrays important historical figures such as authors Jane Austen and Louisa May Alcott, Dolley Madison Elizabeth Barrett Browning, as well as a one-woman performance as Mary Todd Lincoln entitled Mrs. Lincoln’s Salon. Debra still works in the Chicago Theatres; most recently she played in A Midwinter Mummers Tale, and In the Observarium for Terra Mysterium Theatre, Flannigan's Wake at the Noble Fool Theater, and as Rose Kennedy in Rosemary at the Tony award winning Victory Garden Theatre. Debra won Best Actress in the 2004 Chicago Indiefest for her performance in her first film, Zen Noir. Debra has been a member of JASNA since 2010, organized the live reading of Pride & Prejudice at Block 37 on January 28th, 2013 to mark the 200th anniversary of its publication, and currently serves on the board of JASNA-GCR as Program Director.

Paid public parking lot next to the library. Close to the Davis Street stops on the CTA Purple Line and Metra Union Pacific North Line.

This event is free and open to the public.  All are welcome (and highly encouraged) to attend!