The daily life and expectations for a child have greatly changed over the years and centuries since Jane Austen played with her scores of nieces and nephews. But how so? What better guides than two modern-day spinster aunties, Mary Landrum and Amanda Beverly, from JASNA-Greater Louisville, to talk about the day-to-day comings and goings for Regency children? Using scenes and passages from Jane Austen’s beloved novel, Persuasion, featuring Anne Elliot and her nephews, Ms. Landrum and Ms. Beverly will open a window into childhood in Regency England. 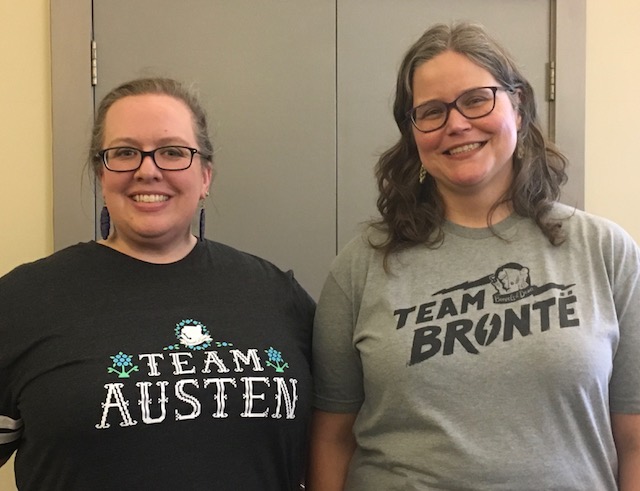 Amanda Beverly grew up surrounded by female family members who taught her the importance of reading, ensuring her destiny as a bibliophile. At a young age, she discovered her love for British literature when she read Jane Eyre for an assignment. Later she would be introduced to the works of her literary icon, Jane Austen. After graduating from Centre College, she went on to work for ten years at her local bookstore where she met Ms. Landrum and became fast friends. She is a Lifetime Member of JASNA, former Program Coordinator for JASNA-GL, Social Media Coordinator for the Jane Austen Festival, and still hosts the Jane Austen Book Club she founded nine years ago at her former bookstore. On the “What Jane Austen Character Are You?” Quiz, she scored as an Elinor Dashwood.

Mary Landrum realized early that she did not share her family’s interests in sports. She would carry her love of reading over to her degrees in English and French literature from Earlham College. From there she taught for a time in France, and upon her return worked at her local bookstore. By then she realized her true passion was reading to children. Earning her Masters in Library & Information Sciences from the University of Kentucky, she is a Children’s Librarian for the Lexington Public Library system. Even though Ms. Beverly has forced her to become a member and regular presenter at JASNA-GL, her first choice will always be the Brontës. On the “What Jane Austen Character Are You?” Quiz, she scored as a Lizzie Bennet.