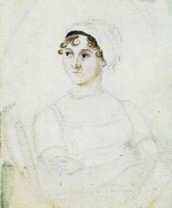 Jane Austen, whose brilliantly witty satirical novels have earned her a place among Britain's great novelists, was born in Steventon, Hampshire, to the Reverend George and Cassandra Austen on December 16, 1775. Her father was a Church of England clergyman best described as a gentleman scholar who supplemented his parish income by taking in students. He welcomed his children and students to enjoy his extensive personal library of 500 books, so Jane grew up surrounded by literature and learning in a family that loved to write. Her favorite authors included the poet William Cowper; the essayist Samuel Johnson; and novelists Henry Fielding, Samuel Richardson, Maria Edgeworth, and Fanny Burney, though as early as age nine Jane herself entered their ranks by composing comic stories and plays much admired by her parents, six brothers and elder sister, Cassandra—her closest friend and lifelong companion.

For almost two years beginning in 1785, Jane attended boarding school with Cassandra in Reading. Upon their return she began to write her humorous Juvenilia, such as Love and Freindship [sic], with the aim to entertain her family and friends. She carefully compiled her prose in three ready-made bound blank books she titled Volume the First, Volume the Second, and Volume the Third. Cherished by her family long after her death, the volumes were published in 1933, 1922, and 1951, respectively.

Jane wrote her first mature work at age 19, the epistolary novella Lady Susan, using the then-popular style of fiction in letter-form. Again using the epistolary form, in her early twenties, she began work on the first of the novels that would one day make her famous, Elinor and Marianne (revised to be Sense and Sensibility). This was soon followed by First Impressions (later revised to become Pride and Prejudice. Genuinely supportive of his children’s literary endeavors, Mr. Austen sent out First Impressions to publisher Cadell and Davis in November 1797, but the publisher rejected it “by return post.” Undaunted, Jane began revision of Elinor and Marianne within the month. 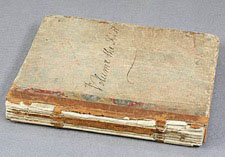 Volume the First before conservation By this time, the aging Mr. Austen had given up student boarders, and Jane’s brothers had begun professions in the Navy, the Church, in business, and as a landed gentleman (this brother, Edward, was adopted by adopted by wealthy childless cousins). When Jane was twenty-five and Cassandra twenty-eight, her father retired and moved the Austen women to Bath, much to Jane’s dissatisfaction. Jane accomplished little writing during the Bath years, but in 1803 she did revise her third novel Susan (later Northanger Abbey) and sold it for ten pounds to publisher Richard Crosby and Company, who promised early publication, but without explanation nor apology he advertised the novel, and then never published it. Once Jane realized the book might languish forever, she asked for its return, but she had spent the purchase money and could not afford to repurchase the manuscript. (Eventually she used earnings from her other books to buy the book back. Only after the manuscript was returned did the Austens tell Crosby he had lost the opportunity to publish a work by the best-selling author of Pride and Prejudice, etc.) New writing was difficult for Jane during the Bath years, and as Mr. Austen’s health deteriorated and the prospect of future poverty loomed, Jane abandoned work on The Watsons, a story dealing with this worrisome theme. 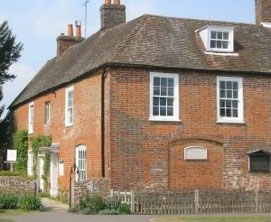 When Mr. Austen died in 1805, the family's income was greatly reduced. The Austen women moved to ever-cheaper housing in Bath, Clifton, and then in Southampton. The brothers who could least afford to help did what they could, but Edward (the son and brother with two extensive estates) did little. No real reason was ever given, but within a month of the death of his wife, Edward offered his mother, Cassandra, and Jane a choice of homes. They chose Chawton Cottage, near his estate Chawton House, in Alton, Hampshire. It was here that Jane returned to work on her novels. (This house is now open to the public.)

After revision, Sense and Sensibility was accepted for publication by the publisher Thomas Egerton in 1811, to be followed by Pride and Prejudice (the novel she called her "own darling child") in 1813, Mansfield Park in 1814. For the publication of Emma in 1815, Jane Austen negotiated with the famed publisher John Murray (who also published Lord Byron and Sir Walter Scott’s works), dedicated it to the Prince Regent at his express wish, and toured his London residence, Carlton House, with the Prince’s private librarian. Despite uncertain health, Jane finished Persuasion in August of 1816, moving on to her last novel, The Brothers (posthumously titled Sanditon), in early 1817, but it remained a fragment because she was by now suffering from the much-debated disease that took her life on July 18, 1817. The two remaining completed novels, Northanger Abbey and Persuasion, were published after her death.

Jane Austen was buried in Winchester Cathedral on July 24, 1817, and the site has since become a shrine for Janeites (Austen enthusiasts). She left her estate to Cassandra, who late in life destroyed many of her sister's notes and correspondences, to the great dismay of future scholars. Yet what has endured are her early writings, partial manuscripts, and her six published novels, which is a tremendous legacy indeed.