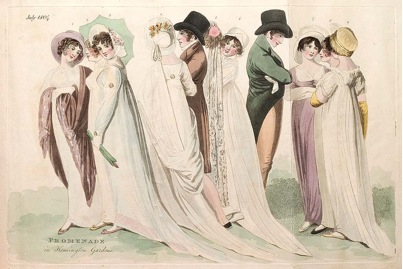 Readers new to Jane Austen often find that, in some ways, they can feel at home in her novels. The characters are so sharply observed and vividly drawn that they seem like people you know, and there are some themes–the desire for love, the fascination with money–that are universal.

But there are also some ways in which Austen’s world differs dramatically from ours. For one thing, this is a much more formal society, one in which even husbands and wives call each other “Mr. Bennet” and “Mrs. Bennet.” It might seem to hard-working people today that the “best” people in the novels are the ones who have no job, and they seem to spend their days doing nothing much to speak of. And although most people today still seek life companionship in marriage, we do not have the same economic pressures to marry that were felt by people, especially women, in Austen’s time. 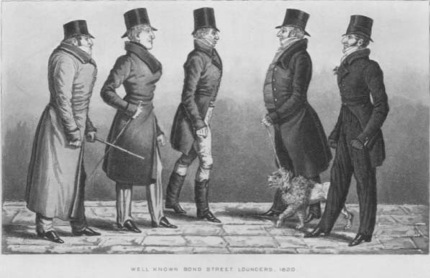 In Austen’s society, a “gentleman” was a man who lived on inherited wealth, mostly derived from the income from land ownership. Because of the time-honored tradition of primogeniture (leaving all property and income as well as noble titles to the eldest son), younger sons often had to make their own way in the world. Even for high born or well-to-do men, career options were limited. There were only certain jobs that were considered suitable for a “gentleman”: the Church, the military, or the law. The Church may not have been the most glamorous profession (Edmund Bertram is teased about it by the fashionable Mary Crawford in Mansfield Park); in general, the army was the more aristocratic profession, while the navy was more meritocratic; while, within the legal profession, there were further class distinctions (a barrister was considered a gentleman, while a solicitor was not).

In Austen’s time, the definition of a “gentleman” was changing: no longer a matter simply of aristocratic birth, being a gentleman was increasingly redefined as being a man who exhibited the qualities of integrity, courtesy, and moral responsibility. Elizabeth Bennet (Pride and Prejudice), rejecting Mr. Darcy’s haughty first marriage proposal, accuses him of not being “gentlemanlike”; we find out later that he finds this charge particularly hurtful. On the other hand, Elizabeth’s uncle, Mr. Gardiner, despite his involvement in trade, or Captain Wentworth (Persuasion), despite his relatively humble origins, are men of honor and good manners, making them true gentlemen. 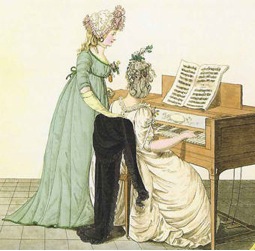 If a gentleman’s career options were relatively limited, a lady’s were even more so. It was considered unthinkable that a woman of the upper and middle classes could attend a university, let alone hold a job. Young ladies were trained in “accomplishments,” of which there is an entertaining discussion in Pride and Prejudice. Accomplishments included singing, dancing, playing an instrument (especially the piano or, for particularly fashionable women, the harp), drawing and practicing various crafts, and a knowledge of what were called “modern languages” (French, Italian and German, as opposed to Greek and Latin, which were considered the province of men). These activities were in part intended to display a young lady’s charms as a way of attracting a husband, but they were not always kept up after marriage; Lady Middleton (Sense and Sensibility) is described as having “celebrated” her marriage by “giving up music.” It is true that married women were often too busy producing children and running a household to have much time for accomplishments; even in households with servants to do the work, the lady of the house had to act as a manager or supervisor. On the other hand, perhaps they were just making excuses for lack of talent or interest.

If a woman without her own fortune were unable to secure a husband, becoming a governess (companion to a young lady) was one of the very few options open (at least to women of the gentry class). Governesses were in a kind of social limbo, neither part of their employers’ families nor one of the servants, and their quality of life could vary greatly, depending on their employers. Jane Fairfax (Emma) worries about ending up as a governess, which she implicitly compares to the slave trade; on the other hand, ladylike characters like Georgiana Darcy’s companion, Mrs. Annesley (Pride and Prejudice), or Mrs. Weston, Emma’s former governess, who has gone on to an advantageous marriage, demonstrate that governesses or companions could sometimes end up in happy situations.

Austen lived during turbulent times, and she has sometimes been criticized for not addressing some of the burning issues of her day, but this should not be surprising given the legal limitations on women’s rights, as well as social conventions. It’s important to remember that women couldn’t even vote (a right they would not receive in Great Britain until 1918), and it was considered inappropriate for women even to hold or express opinions on controversial matters. Mrs. Elton (Emma) evokes her brother-in-law’s opinion on the slave trade rather than claiming to have views of her own about it, and Fanny Price (Mansfield Park) creates a minor stir by bringing up the matter at dinner. 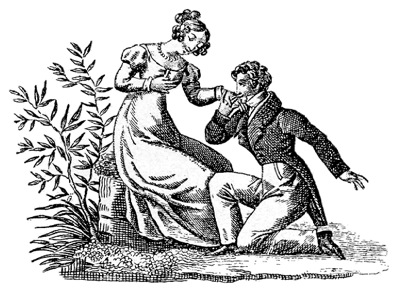 As with the concept of a “gentleman,” ideas about marriage were also undergoing a change in Austen’s time. The notion that marriage should be based on love, and the free choice of partners, had been gathering support throughout the eighteenth century, but it was still felt that children of marriageable age didn’t always understand their own best interests (particularly the “business arrangements” involving property, dowries, and inheritance) as well as their parents did. Some of today’s film adaptations of Austen novels place a lot of emphasis on romance, but her novels reveal that she well understood the complicated combination of economic pressures, social mores, and personal feelings that went into the marriage decision.

Social conventions made the situation particularly difficult for women. The gracious manners and the seriousness surrounding marriage also masked, to a certain extent, the fact that women’s behavior was severely circumscribed. A woman could not ask a man to dance, let alone present him with a marriage proposal. Anne Elliot (Persuasion) cannot just come out and ask Captain Wentworth if he is still (as we would say today) “interested” in her.

As can be seen in the case of Lydia and Wickham (Pride and Prejudice), sexual relations before marriage were not merely frowned upon, but considered outrageous. It might seem odd to a reader today that Elizabeth is so worried that the scandal of her sister’s elopement might engulf the entire family, but at the time it was thought that such behavior must be the product of a bad upbringing and an unhealthy home environment. Most respectable people would not want to marry into a family in which such behavior had taken place. Austen generally does not seem to contradict these societal values.

Still, it is very difficult to portray Austen as a champion of what are often called “family values” today. The Bennets (Pride and Prejudice) provide one example of a “dysfunctional” family: the cynical Mr. Bennet ridicules his wife in front of their children; Mrs. Bennet is willing, quite selfishly, to sacrifice her daughters to unworthy husbands just to get them off her hands; and the youngest Bennet sisters are allowed to fritter their time away on self-indulgent trivialities, with dire consequences. Austen’s narrator attributes a lot of this to Mr. Bennet’s foolish decision to marry an unintelligent woman simply because he found her pretty and charming. The Bertrams in Mansfield Park are not much better, with an often-absent father, an indolent mother, and children who have been spoiled by the interfering Aunt Norris.

Austen does portray good, solid marriages, like the Gardiners in Pride and Prejudice, or Admiral and Mrs. Croft in Persuasion. In each of these cases, it seems clear that the reason for the success of the marriage is that they are good partnerships, based on mutual respect as well as love. Although Austen does not like to end her novels on a simplistic “happily ever after” note, these examples of strong marriages seem to provide good models for her heroes and heroines.